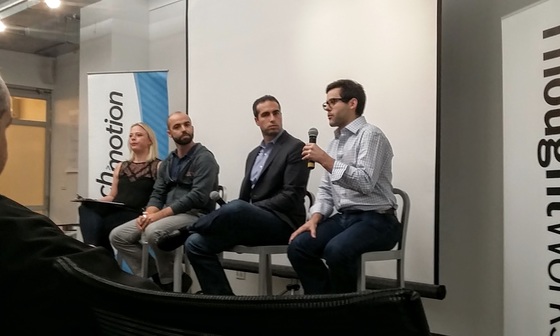 NEW YORK—Nine out of 10 startups fail, studies say. Why? Because many of these startups make products no one wants. This is almost common knowledge by now if you’ve been reading up or attending meetups, at least. Being aware of the high failure rate can be discouraging, of course, but that shouldn’t stop you from pursuing your dream.

There are still ways to lessen the risk — and among the three panelists speaking at the Tech in Motion meetup last October 20, it was Dom Tancredi who probably gave the best advice, summed up in three words. “Do a hackathon.” In 48 hours of creating a product, he added, you’ll learn (a lot of things you can bring to your startup). It’s like a “microcosm of a startup.”

Even for someone already established in his web and mobile development business, Dom & Tom, he said, “I make it a point to attend 3 hackathons a year to keep myself relevant.”

Tancredi admitted to failing with 2 of the 3 startups that he started with his brother Tom. Unlike other startups, Tancredi started with 3 startups and proceeded to concentrate on one when the two other startups wouldn’t cut it.  He has more than 18 years of experience as a full-stack web developer and has led Dom & Tom since 2009.

Josh Brenner, founder and CEO of bTreated, a yield management technology platform for the wellness industry, thinks failure starts even earlier. “People build this big idea in their head, but who (unfortunately) did not talk to people to validate their idea.”

“Immerse myself in the business. Everyone is better for it in the end,” he said.

Drew Silverstein, CEO and founder of Amper Music has a different take on the 9-out-10 failed startups observation. “5 of those 10 should not have started.”

He agrees with Brenner, though that you need to test each idea at its core and then validate that. Again, we go back to what you need to do: talk to customers.

Tancredi cautions though that talking to your customers is just “half the battle.”

When do you think you can reach some measure of success? For Tancredi, you’ll need to have to have “IP, the technology, the team and your efficacy and sustainability.

Brenner took his turn in giving cautionary advice. “People underestimate how much it’s hard to (build and run) a startup. You can be very successful one day and be a failure another day. You will have extreme highs and lows.”

To keep going, Silverstein said, “It is incumbent upon you to find a mentor. Ask a mentor for coffee. Solve one problem at a time.”

Brenner, for his part, thinks that “if you have a passion outside of your job, it helps (to give you ideas). “You don’t have to kill yourself, you need (time) to be creative.”

“You cannot overanalyze,” he added. “Just put out an MVP (minimum viable product) out there,” he said.

As for growing your startup, everyone agreed that you should learn marketing as well.