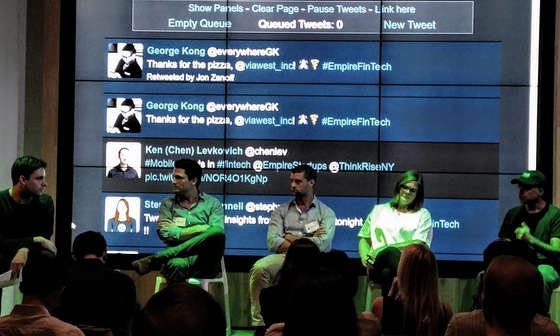 NEW YORK—“Is the app economy dead? When was the last time you bought an app?” The question was directed at Vivek Nasta, founder & CEO, Scout Finance at the panel discussion on fintech by Empire Startups last October 17 at Rise

Nasta was suddenly speechless, as the audience chuckled nervously. Who bothers to purchase an app when many of them are free to download?

Even if Nasta didn’t respond, he did say how it’s tough to satisfy customers these days. “They want speed…They’ll ask for everything. And use one percent (of a feature),” he said. Still, he thinks it’s important to address this and find an answer, even if he it’s very hard to make money on mobile.

“It’s about anticipating what people need,” he said.

In the talk about the challenges of mobile fintech, Nasta was joined by Ed Robinson, cofounder, Stash; Raffaelle Breaks, VP of Global Digital Experience, American Express and Travis Skelly, SVP of Venture Investing, Citi Ventures. It was moderated by Matthew Hooper, VP of Open Innovation at Barclays.

It was Breaks who probably gave the most relevant question of the night, “How do we emulate customer experience online on a desktop and from one’s smartphone?” She also craves for some proper automation in fintech.

Skelly, for his part, thinks it’s still hard to aggregate all accounts.

Hooper asked the panel about the sustainability of apps, as there’s only so much space you can use on your smartphone.

“Apps will still be there,” Robinson said.

Answering for American Express, Breaks said, “Desktop still comprises most of our user base. While engagement is higher on mobile, people just don’t check their account all the time.”

This was echoed by Skelly who said fintech apps are not meant for heavy use or activity compared to some social media apps, naturally.  However, he thinks apps will still be there. He even sees incumbents and startups fighting it out.

Breaks noted how its customers still prefer to call someone at the company instead of interacting with an app.

On making apps relevant, Nasta said apps should have some two-way interaction and good user experience.  He doesn’t believe in a mobile only solution for fintech.

What makes them successful in this challenging environment?

Robinson believes it’s his 24/7 approach to the business. He believes in building trust and engagement. “We provide information ASAP or we lose them.”

For legacy companies, targeting millennials has not been easy as they’re likely to use instruments that are popular in their age group. “These customers may heavily skew toward iOS which is hard to infiltrate,” Breaks said.

Fintech is also looking into replicating their platforms with artificial intelligence, but it’s still early to tell where that is leading.

What do new fintech startups need to do to succeed in this space? Robinson said, “The more you can get the cadence of iterating, making changes and updating the app, the better off you’ll be.”

With fintech becoming more democratized, however, Skelly thinks branding will take a hit. “People don’t need to know what card they use on an uber, for example.”

This development should allow small underserved markets access to new fintech tools which is in contrast with countries like the US where banks are strictly regulated.

“(In the US), it’ll take a year’s worth of specking to make an app for a bank,” Nasta said.

“We’re still in the early innings,” he concluded.