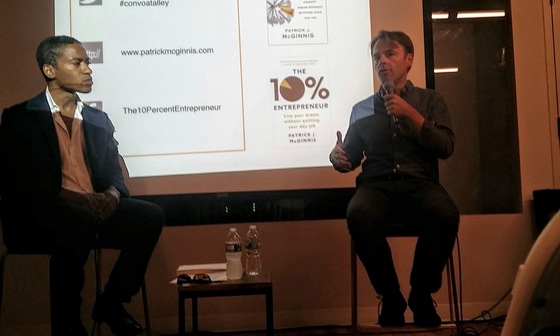 NEW YORK—Patrick McGinnis can be very convincing when he tells you that you can have the best of both worlds: Be an employee and be an entrepreneur, at least just a 10-percent entrepreneur, from the same title of his book. “(People may) think it’s an all-or-nothing endeavor but there are gradations to it,” he said.

When he is talking about gradations, he means you could be any of these four types: an angel investor, investor, founder and an aficionado.

At the new Alley meetup last June 22, McGinnis could not have set a better example of how you can be a 10-percent entrepreneur than himself.  The author holed himself up in his hometown in Maine for one month, in the dead of winter between January 2 and January 31. Every single day, he said, he would write from 9 am till the afternoon, taking a quick early evening break, and continued writing till 10 pm.  It helped that he placed a clarion call on Facebook to get some feedback and material to inspire him.

“Entrepreneurship is not a vocation but a compulsion,” he said, proving how our passions can be turned into money-making ventures. “I thought I could help people. I thought I could go global by writing the book.”

How do you determine if you have it and you’re in the right business? “If you have a personal insight into what you’re doing,” he said.

In many cases, he says people either just have FOMO (Fear of Missing Out) and FODA (Fear of Doing Anything). For the latter, he suggests finding enjoyment in something, so it won’t feel like work at all. If you’ve gone FODA but still can’t do anything, break away from habits that won’t take you anywhere like watching TV and then “figure out what you can do with what you have been known for.”

“That’s a good way to generate long tail,” he added.

But what if your competition is doing more than 10 percent, do you still run your business at 10 percent?  “It takes 7 years to go from Series A to exit,” he said about companies, which should help you gain full steam eventually.

What if you go full time on your business? He only suggests it if you can financially sustain yourself.

For those who prefer to bootstrap their startup, he doesn’t mind but he cautions against crowdfunding, because these investor have no personal stake in your business. “Crowdfunding is like video game. It’s not good when you can’t talk to your investor,” he said.

What would he advice an entrepreneur? “Be a good communicator,” he said.

McGinnis quit Wall Street for a life in international affairs, living in Brazil and Argentina at one point. Being fluent in Spanish and learning French, he said he listens to Podcasts to learn languages. He welcomes feedback and startup stories on his site: patrickmcginnis.com