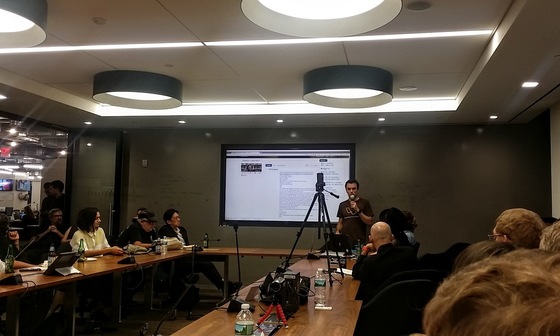 NEW YORK — How would you like your video to be automatically transcribed? At the NY Video Meetup at Conde Nast last September 21, Auto Edit 2 took only a few quick steps and minutes to upload a media, put a speech-to-text system (with the help of IBM American English) to work, and voila! — you got yourself a saved transcription.

The transcription reportedly takes about 5 minutes to process regardless of the length of the media.  You can export a video sequence of selection as they appear chronologically in the video. Or you can export them in the order you selected them, getting you closer to make a paper edit.

Another presenter at the meetup, Verse, may be in a crowded video editing space but its DIY interactive platform is such as breeze to use. It’s a quick in-and-out experience. It’s great for independent storytellers who don’t have the luxury of an editing team or the skills of a coder to embed the images to a site. Headlines and other text in the images also allow for written questions to be clicked and led to the video portion of the question.

Next preseneter TVU offers web-based live video solutions. It transforms the way video content is captured, transmitted and shared from anywhere for viewing on the mobile, tablets, laptops and televisions.

Future Moments’ new app and its fourth one, AudioFix, is an iOS app that improves the audio in your videos.  The demo showed how the app cleans its sound and mazimizes its volume. As you save them using various filters, the original video remains in the same resolution. One can reduce the file size of video for easier sharing using a compress video option.

Host Steven Rosenbaum said his meetup group would not be possible without its audience, where one was inspired some to create video storytellers on YouTube like The Storyscape, which makes learning (some for kids and even adults) sound like “Dave Chappelle and Erkyah Badu hung out in Mister Roger’s neighborhood.”