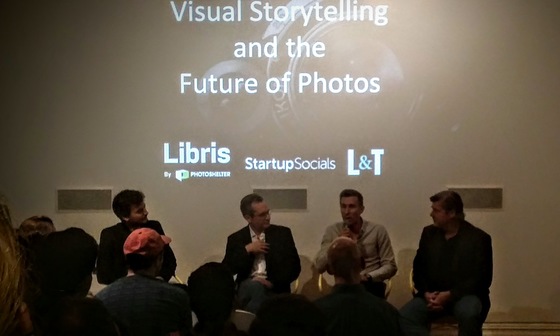 NEW YORK–“I don’t believe in VR (virtual reality),” said Olivier Laurent, editor at Lightbox, a blog by the TIME’s photo department, in a meetup on the topic, “Visual Storytelling and the Future of Photos” last November 2 at the Libris by Photoshelter in Union Square. It was  certainly a gutsy admission, considering that tech titans have rolled out or are launching their own VR devices with fanfare.

Laurent moderated the discussion with panelists Paul Melcher, founder of Kaptur Magazine; Ben Plomion, chief marketing officer at GumGum, a computer vision company and; and Peter Krogh, photographer for PBS and The Library of Congress, among others.

Laurent challenges VR’s potential by referring to technological devices in the past, “Who has a 3D TV?” There was one raised hand in the packed room. What Laurent is saying makes perfect sense, of course. Yes, Facebook has the Oculus; Google recently launched its Daydream VR. Samsung and Sony have their own VR devices as well. This was not the main topic of the evening but it resonated with us because some tech products get some hype but never hit critical mass (eg. Google Glass).

But companies are latching onto VR because there’s always a craving for new ways to tell stories. Photographers, videographers and all practitioners then try to adapt to the new tools–for the purpose of adding a skill as the market demands.

Whether we want to embrace this or not is no longer a question, though. At some point, everyone will need to use cinemagraphs, VR, 360 and still movement in camera and gif, as enumerated by Melcher. There’s GoPro, Drones and many more.

“(Over the years), professional photographers have had to learn Photoshop and LightRoom,” he said. That was years ago but with more tech tools coming out, it seems the visually inclined will need to acquaint himself with more tools, software and equipment as technology keeps reinventing ways for us to tell stories.

However, there’s an even more problematic scenario other than the constant flow of new tech tools at our disposal. How do you get people’s attention span when a study by Microsoft last year pointed to how the ill-focused goldfish is said to have the attention span of nine seconds? How do people compare? We now lose concentration after eight seconds, it turns out. The survey consisted of 2,000 participants whose brain activities were studied using electroencephalograms (EEGs).

These are all compounded by the billions of images uploaded daily. Who has the time to tell their visual stories, if not absorb them?

Laurent, however, may be a purist in his observation about what images stick with people the most. He cites how the Tiananmen protester’s photo blocking a tank is remembered more than its video where he was shown moving left to right to block the tank.

What is future of photography? It may be about create an image that will feel like you’re in there, according to Melcher. “It may be better than any set of cameras.”

“We are developing a new vernacular. Image as data,” Krogh said.

On images as ads, Plomion said, “Ads that follow you. This already started four years ago. There will be more ads catered to us.”

Going back to the future of VR, Melcher said VR is mostly focused on hardware but the growth will be in content.

“In terms of aggregated reality, we’re not there yet,” Plomion said.