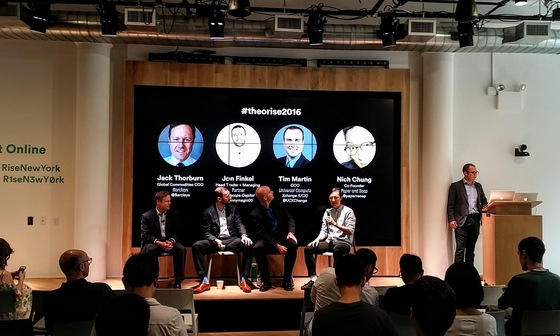 NEW YORK–What if you could pay for usage of your Internet and your mobile phone data the way you use your gas or electricity bill?  At the TheoRise event at Rise last July 15, Nich Chung of Paper and Soap at Rise hosted a talk on cloud as community with panelists Tim Martin, COO of  Universal Compute; Jon Finkel, head trader and managing partner of Landscape Capital; Jack Thorburn, COO of Global Commodities.

The topic is timely as TheoRise theorizes how The Cloud could be treated (and traded) like a commodity or utility as innovation and investment slows, and chasing competitive parity becomes the norm among the Apples, Amazons and Googles of the world.

If not, many prophesy that what is termed “internet bankruptcy. “(Many companies) would not know how to pay for this,” he said.

Developers can use up more space, because the company they work for is growing and innovating; the more important it is then to have the cloud work as a commodity.

In our world of on-demand and open-source, TheoRise said approaching IT as a commodity would not only be a cost-effective measure, it could help pave the way for a truly neutral, universally accessible Internet. Even developing countries who can’t afford cloud could benefit substantially from it. “It will be advantageous for bit players,” Finkel said.

“(The cloud) would be like a metering company,” Martin said.

It’s a new way of thinking that will usher in ways of measuring services in the cloud.

It’s already happening. Martin said businesses can now measure their cloud consumption. When you plug your electric appliances, you don’t know where that power is coming from. With IT, there is a sense of security as much as there are ways to get data.

The cloud is a collection of physical assets. Its computing power will be key resources for a company, creating a transparency, according to Thorburn.

Commodity markets trading a contract in cloud services is not far-fetched.

The meetup used instant feedback and data from Remesh.