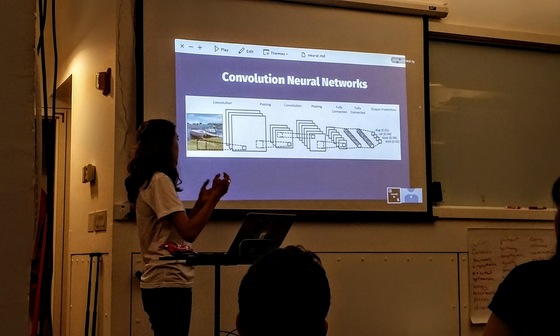 What problems? Imagine having hundreds of images but tagging each one of them on your site? That would be too much of a chore. Clarifai does the tagging for you when you upload them—automatically.

Williams compared convolution to adjacent by saying the former is fast to train and can find multiple items whereas the latter offers no recognition of special structure but is good for finding a single item. Both, she said, creates a multilayer neural network.

What are convolution neutral networks? Deeplearning.net defines it “as biologically-inspired variants of MLPs. From Hubel and Wiesel’s early work on the cat’s visual cortex, the visual cortex contains a complex arrangement of cells. These cells are sensitive to small sub-regions of the visual field, called a receptive field. The sub-regions are tiled to cover the entire visual field. These cells act as local filters over the input space and are well-suited to exploit the strong spatially local correlation present in natural images.

“Additionally, two basic cell types have been identified: Simple cells respond maximally to specific edge-like patterns within their receptive field. Complex cells have larger receptive fields and are locally invariant to the exact position of the pattern.

The animal visual cortex being the most powerful visual processing system in existence, it seems natural to emulate its behavior. Hence, many neurally-inspired models can be found in the literature.”

Today, big companies are confident how deep learning can handle large data sets plus have greater computing power. It’s a game changer for AI prototyping. Not only that, it can serve as a boon for advertisers trying to pinpoint better use and even best timing for any use of photo or videos.

Clarifai has both a REST API that could be integrated with your preferred language along with a Python, Java and Node.js API. For more info, visit developer.clarifai.com or github.com/clarifai