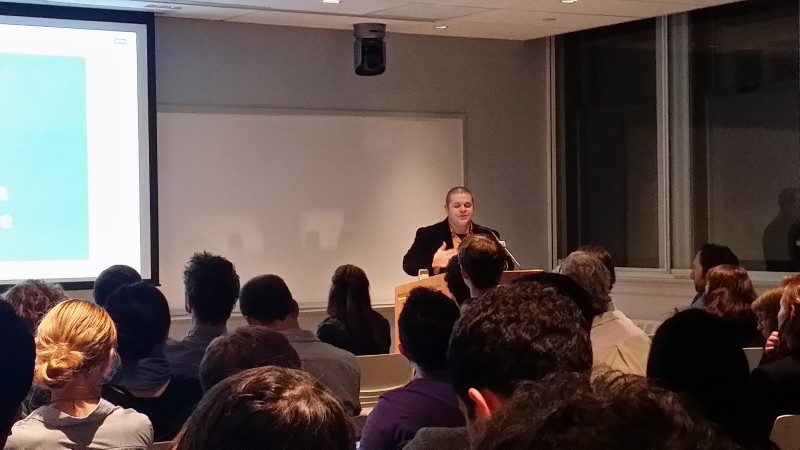 BetaNYC recapped some of the best presentations from last month’s Code for America summit (CfA) last October 15 at Microsoft Civic in midtown Manhattan. The CfA summit is an annual gathering of smart government and civic technology practitioners.

Setting the civic tone of the night was Peter Shanley who asked the civic innovators in the audience to leverage people power in their respective projects. “Technology is not the answer. For issues of poverty, there’s not an app for that.”

Some presentations included Vasudha Reddy’s project on how to use social media to identify unreported complaints and outbreaks of food-borne illnesses in New York City.

Reddy said New York City has 24,000 restaurants and 15 food retailers with 2 out 3 New Yorkers eating out at least once a week. It receives 3,000 complains via the NYC complaint line.

While investigating an outbreak, noted illness complaints were posted on Yelp, but not on hotline 311. This resulted in a collaborative effort with Yelp in terms of extracting keywords, detecting temporal statements and multiple illness reports. Further studies would include Twitter.

David Moore talked about how to keep tabs on your local city council with Councilmatic, now in Chicago and Philadelphia and soon in New York. It quickly informs you about a city council’s actions.

Matt Hampel talked about Transitmix, a simple transit sketching tool for transit agencies and urban planners or armchair planners. It allows you to better design transit routes and pin down the cost of running a bus line in chosen routes. Rail line designs should be in the offing soon.

Randy Meech and Mike Cunningham talked how their company Mapzen provides the back-end work for Transitmix. “As you drag the routes, we’re running it on our servers. We have geocoding vector rendering.”

A Detroit Water Project was also presented as a successful case. It’s about matching people in Detroit to 8,000 + donors for direct water bill help. Over 300,000 Detroit residents face water shutoff due to past due water bills exacerbated by Detroit’s ongoing economic woes. It has raised $575,000 from 8,200 donors.

Since 2009, BetaNYC has been the civic technology and open government vanguard. It has worked with elected officials to engage NYC’s technology community as well as help pass transformative open government legislation, and have supported NYC’s civic oriented startups. BetaNYC’s network of civic-minded volunteers contributes their skills toward digital platforms for local government and community service.