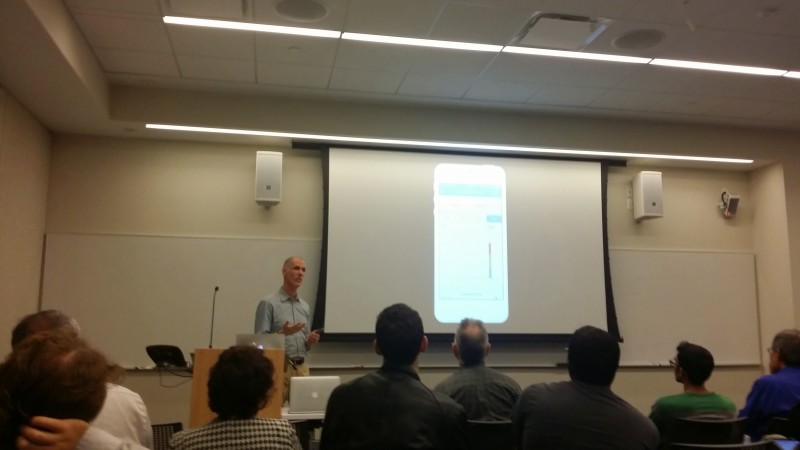 That was Frederick Muench’s call to technologists last October 14 at the NY Mobile meetup at Microsoft. “Reduce steps 3 to 1 if possible.”

It’s not common someone from the Health Interventions at North Shore Health System’s psychiatry department talk about how important user-experience design is for health systems.

It’s clearly a good point in the medical field where life-and-death situations hang over the air.

He cited how text messaging, being inherently social, also reduces the burden for people. It is indeed fast.

Still, the technology that carries text and other innovations has not yet solved the lifespan of batteries.

Muench’s introductory talk on the challenges facing health systems was followed by demos from those in the health space — Cohere Health, Addicaid, SIPPA and Care + Wear.

Clay Williams, co-founder of Cohere Health, talked about how his startup is helping people with chronic diseases understand their condition, take action to improve their health, and engage more fully with those who support them in their treatment and care.

Celiac disease is one of the most-talked about issue these days compared to other diseases. Williams think it’s because “(people) feel ignored.”

An app called Celiacare will be launched in a few weeks which will also include a meal management system.
The next presenter, Addicaid, is clearly a marketplace app that helps addicts find each other on meetups.

Addicaid cites that in the U.S. there are over 23.4 million active addicts, particularly alcoholics and worldwide, 200 million. However, less than 10 percent reportedly receive treatment and to make matters worse, less than 5 percent stay in recovery.

Addicaid hopes that its app can be the go-to for addicts looking for a support network easily on its app. While it is currently building a prototype, it has reportedly signed up over 10,000 users in New York.

The two other presenters were SIPPA and Care+Wear.

SIPPA is a “patient-centric” software that aggregates health information into one secure system, controlled and managed by the patient.

It is trying to solve fragmented health records everywhere by facilitating the consolidation of health records.
Care+Wear is working with hospitals to create products that improve the quality of life of patients who are undergoing long-term medical treatments. It showed its newly launched Band which is being mass-produced in China.

The meetup was hosted by Amanda Moskowitz.