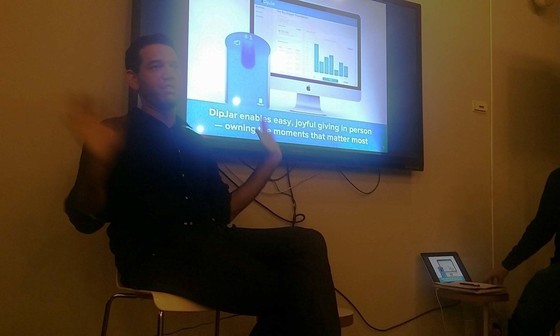 NEW YORK—If George Constanza of Seinfeld lived in the 21st century, he would have solved the issue he had with tip jars back in the day. They never made a sound. When a pizza hired hand took his eyes off him for a second, he didn’t see Constanza show his generosity. So what does Constanza being Constanza do? He tried to grab his dollar back only to be caught as if he were stealing the latter’s tips.

It’s one colorful story among many that DipJar founder Ryder Kessler shares with the audience at the Mobile Payments NYC meetup last December 8 at Alley. DipJar enables cashless generosity via tip jars and donation boxes for credit cards—with a loud “clinking” sound this time, so a staff will you know you’ve tipped. You simply dip your credit card to make a donation in the amount illuminated in this gadget.

Kessler said he was inspired to think of a solutions eight years ago when he was at a café and he saw how baristas were not getting enough tips, although he didn’t pin down DipJar then just yet. He said he would try lots of different things, working for a startup for four years, before he eventually got around to conjuring the idea for the DipJar.

Initially, Kessler said he cast a wide net of potential customers, but he eventually found his market – the non-profit sector. There are reportedly 1.5 million non-profit organizations collecting $240 billion per year in donations, 90 percent of which are made offline.

Released initially in 2012, the patented DipJar now has 2,000 of these devices collecting nationwide for customers, with more than 6 large organizations as customers.

Kessler thinks DipJar is also addressing the overall decline in fundraising in general, because of the diminished use of cash and checks, which makes the device even more relevant now, especially when many low-income workers rely on tips. Tablets solve this somehow as it works as a payment system now–with a prompt for adding tips.

For this reason, targeting non-profit organizations is even more vital for Kessler. However, being in this sector also means getting VC money is not easy. “Some VCs are allergic to hardware,” plus he is in the non-profit space – not a priority for VCs.

What has he learned these years with DipJar? He acknowledges that he “underweighted hardware, payments, VC money and sales and marketing”.

How does one tip with DipJar? Inside the jar is a standard credit card reader. One only needs to insert his card and pull it out to swipe and it will automatically deduct an assigned amount set by the business or DipJar owner.