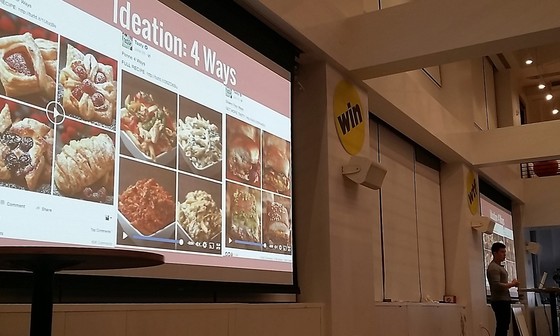 NEW YORK— How would you like to do things in four ways? asked Alvin Zhou of Buzzfeed Tasty at the Design Driven meetup last December 13 at Buzzfeed.

Now if this applied to your life, imagine being able to restart your day four times, so you can pick the best one and end up with a perfect day. Of course, we don’t live in that world. But Tasty on Buzzfeed does. Watching, say, breast chicken baked in four ways certainly saves you time searching for recipes on Google or YouTube.

Buzzfeed presents the videos in easy-to-digest quadrants the way they’re edited. That’s 4 videos that fly by like it’s just one video. Before you know it, you’ve watched a bunch of other four-meal recipes. The videos don’t show any person guiding you. It’s just the hand working its magic on the food. Your attention is focused on the process that whizzes by.

Zhou was joined by 3 other presenters, Emery Wells, CEO and founder of frame.io; Caroline Wurtzel, designer of Bustle and Laney Caldwell, product manager of x.ai.

About 250,000 users have been using it in myriad ways — for watching dailies from a shoot, organizing storyboards, working with remote editors and animators, sending large files, centralize assets, streamlining workflow, showcase working and sharing work in process.

Wells reminds us that with frame.io, you can execute the basics and solve actual problems.

Bustle’s Wurtzel presented, showing the site’s meme-making process, a part of its success, being the largest site for millennial women with 45 million unique visits a month.

“We are your best friend on Instagram,” Wurtzel said, echoing this in the way it presents memes—by talking to each other about the things happening in their lives and how they can translate them to memes. Where else can we find inspiration?!

Asked about how she judges the success of a meme, she said she looks at the likes and comments and tags.

Last presenter, Caldwell talked about designing conversation with x.ai, an invisible software and conversational interface that sets up meetings for you.

Comparing visual interface designs with designing a conversational interface, she said the former relies on typography, color, elements, and motion, whereas the latter sets the tone, style, word choice, sequencing of phrases, and emphasis.

What are the key characteristics of a successful AI agent? For x.ai, it has to be truly anonymous which means users should have little work to do as much as possible. Users should be able to communicate in a natural language. And more importantly perhaps, it has to have a natural response to the user which Caldwell said is what x.ai is all about.