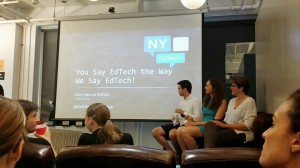 What is happening in (edtech) education technology around the world? It’s too broad a question to tackle in one hour. But there were some recognizable buzzwords at the NY EdTech meetup at Knewton last June 17 in East Village: telecommunication companies, content translation, international entrepreneurship, MOOCs (massive open online courses).

Giving their opinion on the subject were Alison Lytton, senior product manager of Scholastic; Josh Robinson of Business & Development Strategy at Knewton and Andrea Tejedor, an EdTech steward. Scholastic publishes and distributes children’s books around the world, serving customers in 45 languages and employing about 9,500 employees worldwide. Knewton personalizes learning for all using predictive analytics to detect gaps in knowledge and differentiate instruction for each student.

It was an informal, free-wheeling discussion on international education technology or in short, ed tech. However, the speakers did have a lot to say on certain issues. Lytton said her company’s work involves testing results in East Asia these days. “I see lots of telcos (telecommunication companies). We’re also past infrastructure to provide (educational) content. We’re looking to improve math and reading in schools, and making sure parents are engaged. Digital is opening doors for engagement,” she said.

Robinson said he focuses on Asia Pacific: “There is a huge adoption in technology, with penetration of broadband. So many people have smartphones in Korea and Japan. We’re seeing ed tech moving forward in Singapore and Hongkong,” he said.

Developments in China are reportedly driven by parents, but Japan seems to be heading into more ambitious territory as it intends to have tablets for use by all students by 2019. “Now that computing (cost) is going down, they can implement it,” he said.

Tejedor, who just arrived from Turkey, sees Brazil’s tremendous potential. “Historically, Brazil has not paid attention to education until the 80s.” But she said that was in the past. “Today, Brazil is also initiating Startup Brazil. It’s an emerging market. Amazon is working with its Ministry of Education through the Whispercast platform. Khan Academy is hiring teachers who can do video.”

Robinson said the internationalization of MOOCs is paving the way for big organizations to provide help in terms of translation of education materials. The World Bank was cited as one of the companies doing this. There’s so much culture in reading and learning and engaging kids, according to Robinson.

LLytton said that even if Scholastic has a big global presence, but fostering international entrepreneurship for them is still a challenge. She mentioned how having one person in 20 countries is still not enough, especially when you consider how each market is unique. “We’re training for tablets and some teachers don’t know how to use it. There’s a lot of hand-holding and consultation.”

As far as international startups go, Robinson cited Vox Learning with its 6 million learners. Japan has traditional publishers not interested in ed tech. In China, it’s growing organically. Still, he thinks there is entrepreneurship going on, it’s just that some big companies need help because they can’t do it in-house.

All this beehive of activity is welcomed by Robinson. “One might think there are more startup from us but some local startups are doing something. To focus on home (in the U.S.) is not going to work well for ed tech.”
Most of the panelists agree how ed tech can only flourish if it involves adopting different cultures in the learning mix. In Japan, everything is collaborative. For instance, a teacher may put containers in a classroom and asks which one will hold most water.

The drilling and memorization are happening at home,” Robinson said. Echoing this statement, he said, “We can’t teach you how to debate but we can teach you the facts to get ready for debate. It’s about creating a well-rounded person not just good in math.”

How do you teach while adopting to a country’s culture? Lytton said it is market-specific, or should we say country-specific? New Zealand has 4 to 5 million people who are outward-facing.
Lastly, how does America handle data collection concerns in different countries? Tejedor implied that it’s the least of their worries, as their primary concern is to move people out of poverty. Lytton said it’s different, though in Canada and Europe where people care about their privacy and they find themselves in endless legal talks.

Robinson said the best way to learn about any country is to be on the ground. If you’re interested, the panelists said read up, write to contacts, and connect with someone passionate about ed tech, too.