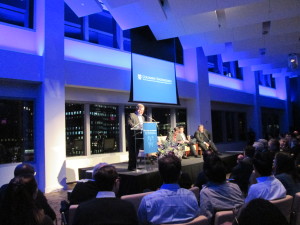 That’s what people like to think when they see the Union Square Venture principal, the man who has helped build, if not backed up startups like Foursquare, Kickstarter, Twitter, Tumblr and Zynga.

Observing how people swarm to him like bees after each talk cues you into how he has become a rock star in the New York tech startup scene. It was like this at the Columbia Engineering’s demo night last December 13 at Time Warner Center. Columbia Engineering dean Mary C. Boyce moderated the discussion.

One attendee followed Wilson’s every move, dragging me along with him. I met Fred Wilson before, so I was not as excited as he was. But I understand. I just feel bad for other guests when he’s around; this time, Tech and the City author Alessandro Piol and Shutterstock founder Jon Oringer.

Wilson minces no words. There’s no hesitancy, even when he replies to a most pointed question. Some may call it candidness where others may see rebelliousness, even recklessness. I think he has answered these questions before and he just decided to peel the layers of half-truths to tell you what it’s really like out there.

This perspective may come from seeing failed startups. The failure rate, as most publications will tell you, is about 75 percent. For those in the industry, it’s 90 percent.

Wilson said he embraces failure, but he is quick to qualify it. He doesn’t mean lifelong failure but failure that toughens you up, because in the fickle tech world, even the most successful ones fail. So he is suggesting that as long “as you learn the tough lessons of failure,” he is willing to overlook it and take a chance on you. “Making a mistake should not be a Scarlet letter, as long as you realize the mistake.”

But to rewind a bit from the talk he gave along with Piol and Oringer, the Columbia Engineering’s talk was centered on New York’s beginnings in the tech scene and perspective on critical opportunities and roadblocks facing innovators and startups in the future.

Where Oringer credited outgoing Mayor Bloomberg for the thriving tech scene, Wilson was quick to counter that it was Google and the hundreds of engineers it brought to the city that was the catalyst for New York’s emergence as the Silicon Valley of the East.

“Bloomberg was friendly, but it (the tech scene) would have happened even without Bloomberg.”

“The biggest thing that happened in New York was when Google’s software and engineering team came to New York. Google is a gift to New York,” he added. Ex-Googlers these days have their own startups in New York.

Still, Oringer pointed out how multilingual New York also made it easier for startups to take their products or business model on a global scale.

Tech and the City author Piol was more specific, saying the turning point was 2008 when the financial meltdown made many people switch to the tech startup scene.
Wilson wrote the foreword in Piol’s book.

Asked about 3D printing’s future in New York, he said the city has the talent for it but stopped short of predicting New York is going to be the center of 3D printing.

After the talk, people were led to the startup demos of students and alumni of Columbia University in an open reception. The startups were Urban Compass, Trek Medics, eBrevia, KeyMe, and Meal Logger

Urban Compass offers a technology platform that enables customers to manage their entire apartment search in one place. It has a team of agents for good measure.

Since August 2012, Trek Medics’ dedicated full-time staff has been working to complete beta-testing for their SMS-based emergency dispatching software, Beacon, with efforts currently focused on the southern coast of Haiti. Beacon addresses response gap by allowing community paramedics to quickly locate, treat, and transport emergency victims from the scene to the hospital.

KeyMe is a cloud-based “keychain” that stores key’s cutting instructions, while Meal Logger is a photo food journal designed to empower people to improve their lifestyle.

What does Wilson look for in a startup founder? “You have to be charismatic,” he said, adding that it’s an important quality to have if you are asking people to fund you.

And if you’re a founder, he said the first five people in a startup is the most critical.

But if having Fred Wilson’s ear is going to help you, well, it depends on what you have to offer him, of course.