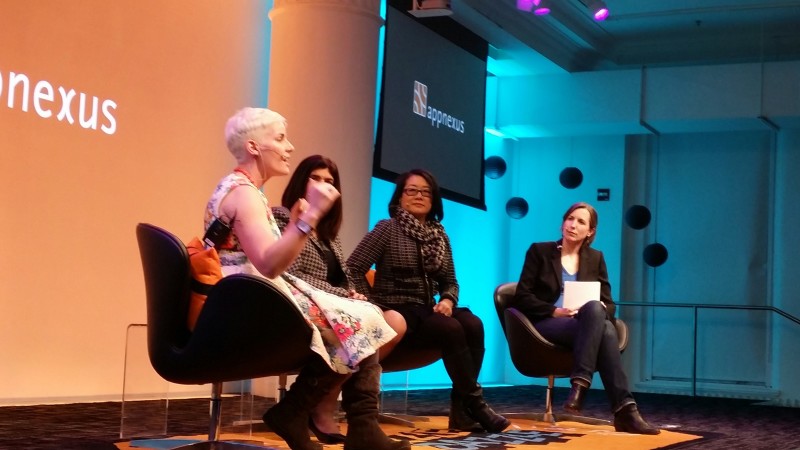 As the first CTO of New York City today, Tantoco likes to see how innovation can work to scale culture and organizational design. She cited the “pockets of innovation” and creativity in the city. In late 2015, the city will be able to make use of old payphones as fast Wi-Fi spots covering 150 feet. With hyperlocal advertisements, the payphone-turned Wi-Fi spot will generate income for the city.

More speficially, she is looking into how technology can do wonders for every kid in the city. Tantoco’s challenge to anyone up to it, “If you have the technology, how do you teach every kid?”

Being New York’s CTO, she said, “is the hardest job and the best job.” The hardest part about it comes from her next statement about how innovation can be risky for governments as well.

The talk about disruptive technology provoked Fournier of Rent the Runway to say, “Apps are annoying, infuriating and disheartening.” Anyone could relate to this when you count the fact that there are only few web browsers and most people use Chrome already whereas the total number of apps is now 2.5 million.

When it comes to online security, Tantoco talked about how it’s crucial to develop a better experience with it. “You can’t even get in yourself (these days)” when you need to have five passwords in anything.”

Mayer’s own qualm these days was directed mostly at lawyers: “Tell me how I can do it instead of saying what I can’t do.”

The audience responded well to Tantoco’s talk about New York being the second tech hub in the world after Silicon Valley. New York has over 300,000 tech jobs and non-tech jobs in tech companies. It is center of publishing, finance, health and many other areas. “I think we’ll be no.1 soon.”

For someone who grew up in Flushing, Queens with Filipino lineage, Tantoco likes how New York has become the most diverse city in the world.

Fournier responded to talk about the city, by saying how she loves the business savvy of New Yorkers, even in software development.

Mayer sees the city scaling up with talent and having more role in community building.